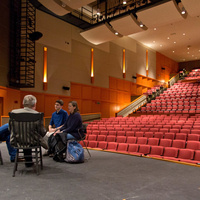 The One-Acts is a show created, directed, and written by students here at PLU, and we would love for you to be a part of it!

Auditions are in the Ness Lobby (2nd floor KHP), and are on December 10th from 6 - 7:30pm, with callbacks happening from 8 - 10pm that same day. Please prepare no longer than a 60 second contemporary monologue.  If you are unable to make that day but would still like to audition, feel free to send apo@plu.edu an email and we can see if we can figure something out.

Below is the audition form and the sign up sheet, as well as brief summaries of the selected plays. We hope to see you there!

"A girl named Kate just got her license and is navigating the freedom that comes with it, while trying to figure out who she is and what her place in the world is within her relationships. She lies to get into a concert with her friend Charlie, and as the night wears on they realize the severity of their choices now that they’re old enough to make them on their own."

"An Asian American young woman (Lara) is at the end of her first year in college and she is meeting her boyfriend's parents for the first time. We are all already nervous to meet our partner's parents, but this one act examines the extra stress and fear that being a person of color adds to that anxiety."

"Heinrich lands in prehistoric times and is met by 2 cavemen. He soon discovers that he cannot go home and has to deal with the fact that whatever he does might change the course of history."

With A Stroke, written by Mathæus Andersen
Directed by Adaline McCormick

"Pete is a creative person who avoids doing his work. Therefore, his father has hired a butler to help him stay in focus and not linger too much on his hobby of painting."

If you have any questions or concerns, feel free to email apo@plu.edu.