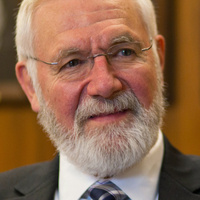 The 2020 Rachel Carson Science, Technology and Society lecture plans to bring Dr. Willliam Foege ('57) back to Pacific Lutheran University. Dr. Foege is best known for his leading role in the effort to eradicate smallpox, but he was also key to eliminating  Guinea worm disease, polio, measles and river blindness. He's a global health champion, especially in the arenas of child health and development, preventative medicine, and vaccines, and he lent his passion and expertise to help shape and expand The Bill and Melinda Gates Foundation's revolutionary mission in global health.

In the 1970s, Dr. Foege served as the Director for the Centers of Disease Control and Prevention, and in 1986, Foege became executive director of The Carter Center where he continues to serve the organization as a senior fellow. Former President Jimmy Carter called Foege one of the two men in his life, other than his father, “who have shaped who I am.”

For his lifelong commitment to improving the lives of people of all nations, Dr. William Foege was awarded the Presidential Medal of Freedom by President Barrack Obama in 2012.

This lecture is free and open to the public.

The talk was so amazing. First of all to hear all his stories and his advice was inspiring. Then to know that he came from PLU and was able to achieve what he did through taking opportunities and knowing what his values where rather than a big plan. At PLU while vocation is talked about it was nice to hear someone who didn't have things fully thought out in their life and things worked out.