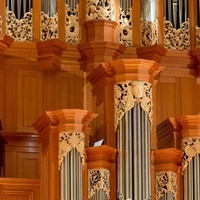 Widely known as a performer in the United States and in Europe, Dr. Porter has also achieved international recognition for his skill in improvisation in a wide variety of styles, ancient and modern.